Great light effect in the smallest of spaces!

Are you missing that certain party atmosphere at one of your parties? The GL-8 USB Gobo Partylight is a powerful RGBW LED light effect, which illuminates the room with different moving motifs and thus conjures up the right party mood.

Colorful, moving lights
Four LEDs in the colors red, green, blue and let the four different gobo motifs dance through the room and thus conjure up a large-scale lighting effect. The color change happens automatically or - thanks to the integrated microphone - to the rhythm of the music.

Remote control
Although the Logo Projector has a switch on the back for the three settings Close, Auto and Sound, the full range of functions is only available with the remote control. Regardless of the switch position on the device itself, you have access to the color, speed and mode of the gobo motifs.

Power supply via USB
The power supply of the GL-8 is made possible by a power cable with USB plug and a suitable power supply unit. This allows the light effect to be used independently of power sockets on a laptop or power bank.

Area of application
The silent light can easily be placed on the table, e.g. to create a magical atmosphere in the children's room. With the mounting bracket, it can also be attached to the wall or ceiling and bring the party room to light.

Showlite GL-8 USB-Gobo Partylight
Review from Olaf on 12.12.2021
This rating has been translated automatically. Original language

verified purchase
does what it should, looks good - is unfortunately not suitable for 7.1 soundsystem, because you have to make very loud

verified purchase
so it's good, unfortunately also nothing for 7.1 sound system, and was delivered without remote control, therefore no reaction to sound

This product is also available as b-stock: 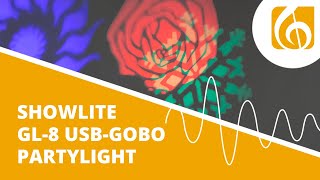