Let there be Rock!

Another tile for your sound floor?
Avis d'Leonardo le 19.05.2020
achat vérifié
Long version short: Yes, you get what you pay. There is no hidden gem here, but the amp sound is good enough on both channels although driven sound grain and intensity is more of a matter of taste so be mindful.

Then, to palliate the lack of user internet reviews and to practice my english a bit I will try to describe in detail my exprience.

This is the second tube amp that I have in my live and the first with two channels. There was a time before when all it was at my reach were transistors, but that is another story.

By now all I can say is that I have some mixed feelings with this Rocktile 30 watts amp head, not that I could not somehow anticipated for the outcome from a retail sale price around 290 €.

It seems to me after my online scrutiny that to say Rocktail tube heads is the same as to say Eagletone (Woodbras) or Fame Hot series (Musicstore) tube heads.

The amp shell is MDF and is mostly well made, but there is cosmetic evidence of the paid price when you look inside the shell. Outside shell, tolex, corners, handle, etc, are good enough and the control panel looks really nice. Luckly, because of the front top panel being solid MDF you can not appreciate the ghastly car tuning-hip-hop culture legacy coming as a blue led light placed under each of the three pre-amp tubes. That toy like led light is there on the rear view nonetheless if regeton glow illumination is your thing. If you venture deep there then you can substitute the top front MDF panel and put something translucent. Sadly there is no auto-tuning knob.

The only two not so little (but no yhat big if you are handy) problems find inside the shell was: one with the cable routing of the reverb touching V1 and V2 of pre-amp section, being the recipe to cook a cable failure at slow valves heat, and other with the place of the reverb tank itself causing by itself two inconvenients more at once: First, preventing to replace one of the 6L6 power tubes without extracting the whole amp board from the shell, and second, propitiating a forced and uncompatible relation between one of the reverb tank free-soul-airy-springs and a firmly-strong-too-long screw coming all the way down from the handle of the shell, wich proved to be the cause of the reverb being weak even when full engaged in the first test. All of aforementioned was corrected with not too much of a hassle and without compromise for the electromagnetic law that rule the fragile world of spring tanks reverbs.

By the way the reverb sound is not that deep and enveloping as a surf aura reverb but it is very useful. It is a double spring short tank, horizontal positioning obviously, and is a kind of a treble inclined sound. I find it nice anyhow and it give you that spring bliiiirrrp sound when full engaged.

Inside deep, circuit board looks like “Made in Hurry”, as some says, but for my non electronic expert but picky sense of order nothing seemed absurdity wrong placed inside that electronic suburb. Anyhow, I took the time to separated with a guitar pick the parts that were touching to each others. Yes, picky, I know, beg you pardon.

That level of overcrowding and potentially sparking promiscuity between resistor, diodes, condensers I could not tolerate. Unnecesary puritan task maybe, but I know that those little guys soldered inside can get very hot very quick when guitar music start. Hey, overseas guitar amps builders, you don't have to take it literally when you assemble a circuit for a hot guitar amp.

The amp sound good to my taste and playing feeling is very good once setted but the two channels are sort of yin-yang failed lesson.

The only problem being that those two channels share the same Eq section, and that is problematic to the point where it is almost impossible to dial a sweet Eq spot where the two channels could offer their best. So switching between channels in and out is not that practical as I remember was on other amps. I don't know if that is a normal operation in a two channel tube amp. Again, the problem seems to be overcrowding: there is no enough room for two so differents amps in one single Eq space. For that matter the Fame Hot 50 watts (Musicstore) amp head solved the problem by giving an Eq section for each of two channels.

Even weird is the fact that de channel switching cause a drop in signal, wich re-enter the other circuit way with a noticeable fade in on volume. That happens going clean to hot or vice versa, and that lead us two the operatings pecularity that this 30 watts amp head impose: circuit behaviour is weird.

The thing tha attract me the most to this head was the fact of having a master volume controlling the two channels to be able to use it at home. And that works very well on this head. Later I find that you can get the amp to sound anywhere from calm and neutral to snappy and percussive by controlling the amount of pre-amp and amp charge on the sound equation. Albeit there is an important Eq variation going one way to another so you always have to pass by the eq controls to compensate.

Eq controls are smooth and easy to rotate but not that simple to use. Bass is bassy, mids are ok and trebles are modest, but the amp is bright anyways. But the problem is that Eq pots (the bass control more than any other) work like a superbike throttle from 1 to 4 and then you lose it. May be it is a linear pot? I certainly do not know and I don't go to dissasambling the darn thing again any time soon to find out. Another thing is when all three Eq controls are on 0 the amp will not sound. Ah? First time I see-heard that!

So, being the controls pots that ways they leave you with the task to learn to enter in another all new level of concentration to be able to make tiny little micro adjustments to get to the sonorous point where you want your guitar tone to be. Add to that the horizontal movement of the two “brigth” and “channel” micro switches and their proximity to the pots (cost decisions oblige), the flat screwdriver type nobs and you end with a sport bike-wet-sinuos-country-road like situation control panel where the inadvertent movement of a slopy finger could easy get you out of road.

Once you get the tone you like you will wanna play long time because its sound nice but if you change guitars or channel you have to start it aaall over again.

-Bright micro switch works almost as well ass the naked emperor cloths.
-There is beneath the master control section a yellow led that remains always lighted doing nothing but burning your iris each time you look at the control panel for the sake of ear. Yes, you read well, it may be a feature to develop your ear by blessing your sense of view.
-Hum and hiss are very low.
-Of course you can put a 12at7 on V1 to enter on another complex of frequencies with a bit more of headroom.
-Of course you can put a 12 (whatever you want) in V (whatever you want) to ( do whatever you want),
-Packaging is really good.
-Online buying experience and delivering (Musikhaus Kirstein) was very good.

-At the end I will keep it because I buy it stock-B for a good price for what it is I think.

Hope this report serve you all well. 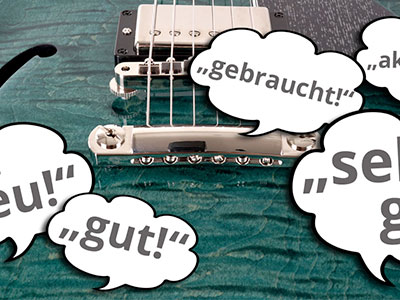