The compact XENYX 1204USB mixer allows you to effortlessly achieve premium-quality sound, thanks to its 4 onboard studio-grade XENYX Mic Preamps and ultra-musical "British" channel EQs. Add to this our easy-to-use "one-knob" compressors, which provide total dynamic control for the ultimate in punch and clarity, while respecting all the power and emotion you pack into every note - and the 1204USB becomes an incredibly versatile mixer for your live performances.

But the XENYX 1204USB isn't just designed to handle your live gigs; it also provides the state-of-the-art tools you need to make stunning, professional-quality recordings. Along with the built-in USB/audio interface, the 1204USB comes with all the recording and editing software needed to turn your computer system into a complete, high-performance home recording studio.

Sonically Superior Mic Preamps
The XENYX 1204USB gets its name from our legendary, high headroom XENYX mic preamps, which have been praised by audio engineers all over the world. XENYX preamps off er a staggering 130 dB of dynamic range, with a bandwidth that extends from below 10 Hz to well above 200 kHz. Armed with these outstanding mic preamps, the XENYX 1204USB provides such transparent, crystal-clear performance you just might think someone upgraded your mics while you weren't looking.

One-Knob Compression
Behringer's "one-knob" compression is available on all mono channels and is easy to operate, even for entry-level users. With this one knob, you can easily dial in the perfect amount of compression for instruments and vocals, creating powerful mixes with punch and clarity. This is indeed a rare feature for products in this class - but standard on the XENYX 1204USB mixer.

Your question about the article Behringer Xenyx 1204USB Mixer 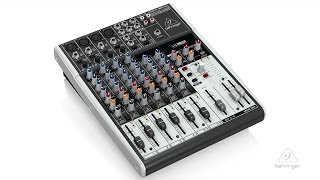 Our specialists will be happy to advise you.